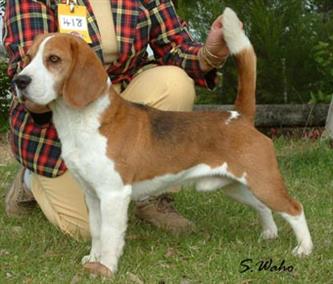 Well I know that it says founded in 1963 but that is not quite correct, at least as far as the Kennels go. However it is the year that I bought my first pedigree Beagle. Prior to that I had acquired a Beagle cross, name of “Sparky” that was going to be put down if I did not take her. Her mother was a pedigree Beagle that had had a romantic liaison with some unknown suitor, possibly a corgi. Our children were very young and Sparky seemed the ideal pet for them and how could we see her put down? Everyone “in the know” told us that she had the Beagle personality, so when she was tragically killed at quite a young age we decided that it was time to have a proper pedigree Beagle. Not knowing too much about buying a Pedigree dog we scoured the newspapers and finally bought a nice little bitch name of Cindy of Corsebar, she was by Barvae Forager out of Caleybrae Crocus. Forager was by Eng. CH Barvae Paigan, out of Barvae Affable and Crocus was by Rossut Plunder out of Auldrigg Bardot. So without knowing too much about it we had quite by accident, bought a bitch with excellent blood lines! That was in 1963. We went along to a couple of shows and read a few Beagle books and got quite hooked! Of course we did not do any good at the shows except to meet and chat to some of the Beagle people of the day. That is how we came to use Braxburn Buchshot over our Cindy and her first litter was born in 1968. So we had started! We kept Buddy of Sligrachan from that first litter and when we (Joe & Marion Watson & family), moved to Australia from Scotland in 1969, Buddy and Cindy came with us. Unfortunately Buddy developed Leukemia and we lost him at 18 months of age.
At that time in Western Australia, Mrs Mawby had not long started with Aust. CH Kintore Chatterbox and produced her first Clarion litter which included Clarion Cluff and Clarion Cameo, both of whom made up their titles. We then used her Aust CH Clarion Cluff over our Cindy and produced Sligrachan Finnart in 1970. Then we bought a bitch in Australia, Kamakura Keepsake, she was out of Cluff’s litter sister, Aust. CH Clarion Cameo by Aust CH Bluebell Kiwi-Son. Finnart was put over Keepsake and produced our lovely Sligrachan Gigha in 1971. We were on our way! Gigha was mother to our first Australian Champion Sligrachan Miss Argyll, made up in 1975. She was also mother to Aust. CH Sligrachan Iona, made up in 1976. Those two bitches appear in most of our present day Pedigrees.
In 1975 Argyll was put to Aust. & NZ Ch Balansheen Backchat to produce Aust. CH Sligrachan Arnadam. “Adam” titled in 1977. Our Registrar of the day had made a mistake in the spelling of the name and being the Scot that I am, I refused to pay to have it altered! That is the reason that I was then able to use the CORRECT name in 1995 for our current winning Top Beagle, Aust.Grand CH Sligrachan ARDNADAM.
In 1976 Miss Argyll was put to Amer. & Aust. CH J Dons-Salt-of-the-Earth of Rozavel (Imp USA). I used to hate writing that lot out in pedigree forms and Show entries!! Nowadays computers make it so much easier. That union produced Sligrachan Bonnie Jean in January 1977. Bonnie Jean titled in 1978. That same year Ruth Hasemere had also used “Salty” and produced Sylvanlee Stalwart. We bought Stalwart when he was eight weeks old and he was a real little SHOW PONY. What a presence he had in the ring. He quickly made up his Aust. Champion title in 1979.
Aust. CH Sligrachan Iona was put to Aust. CH Clarion Clipper to produce Sligrachan Tobermorie, Sligrachan Sandgroper and Sligrachan Storrnoway in 1979. “Sandy” made up in 1980 and Toby and Storrnoway in 1981.
We had really arrived!
This had completed a circle for me with the combination of our imported lines, which were mainly Barvae and Rossut and Australian lines Clarion and Balansheen that I had moulded into Sligrachan.
Sligrachan has become noted for producing quality and type and a Sligrachan puppy can usually be picked out by its lovely head and soft expression.
Joe was mainly behind the scenes, as most husbands of Dog folk are, but he was always there to support and encourage Marion and later daughter Heather in the Show ring. Showing and Breeding slowed down when Joe was diagnosed with Melanoma in 2005 and sadly he passed away in November 2007. Marion & Heather are determined to carry on for his sake – He loved the Beagles! 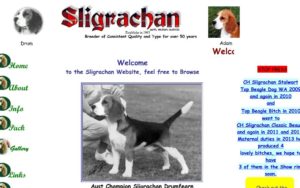 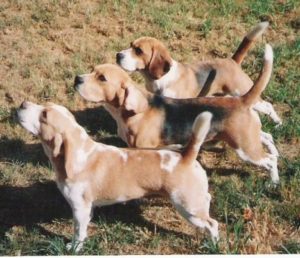 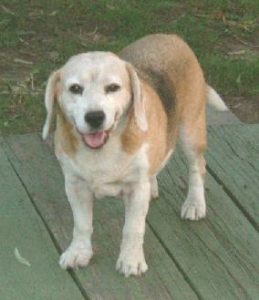 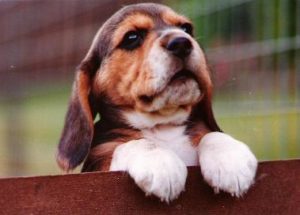