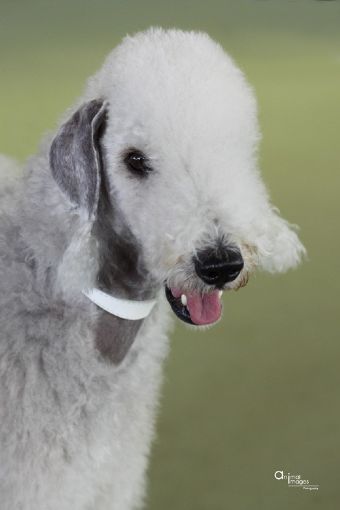 I enjoy showing my dogs. Ch Ausbed Blythe Spirit (AI) has retired from the show ring. Spirit is from frozen semen from Granitor kennels in the UK. Ch Ausbed Born In Boots (AI) comes out to show occasionally too, as I like to give them a break from showing. After all, it is my hobby not theirs. Bootsie is from frozen semen from Bisbee kennels in the UK. I would like to thank Dorothy from Bisbee and John from Granitor for their willingness to go to the trouble of having the semen collected and sent to Australia. The pups from both litters have made all the effort worth while.
I am showing Ch Ausbed Affair to Remember (Mem) she is the result of a mating between Ch Tolpedn Romance (Imp UK) and Ch Wurroit Lucila Miss.
Look out for Ausbed a la Mode (Poppy) in 2013, she will be making her debut. Poppy is the result of a mating between Ch Ausbed Born in Boots and Ch Ausbed Blythe Spirit.
Our UK import Aus.Ch.TolPedn Romance, (aka Manny) was bred by Ken Bounden (TolPedn) in collaboration with Chris Meyers of Tcheria kennels. Manny is a delight. With his good looks and sweet personality he can only improve our line.
Manny has appointed himself “Chief Rat Catcher” and is living up to the reputation Bedlington Terriers have. He is very fast and very efficient, the only problem we have now is that there are no rats left for him to catch.
Aust Ch Swedish import Isotop’s Joyride (Jenna) is now retired. She was Best of Breed at the Perth Royal Show in 2005. An absolute sweetie she loves everyone and everyone loves her.
Ausbed Bedlington Terriers live in Western Australia, Victoria, NSW, Canberra, South Australia, Queensland, New Zealand (NZ Ch Ausbed Traveller CDX) We are sad to report that Fin Ch Ausbed Alcheringa has crossed the Rainbow Bridge as the resut of a road accident.
Health: My first Bedlington Terrier had Copper Toxicosis (and was never bred from), this convinced me that health is most important. This is why my dogs have been tested by Vetgen in the USA (tested clear 1/1 ) and were the first Australian dogs to be tested in the UK with what was supposed to be the definitive gene test. My dogs are normal i.e. no deletions in either copy of the MURR1 gene. However the effectiveness of this test is in dispute. VetGen has recently added to their test and now they also test for a deletion as well as the allele marker, fortunately my dogs show no deletions. The results of dogs I have had liver biopsied are encouraging as none have been affected. Fortunately for the breed more research is happening, as there have been anomolies. Because of this I have recently started to test all puppies. I have also recently changed to testing with Gentech in Melbourne, because they can test my puppies and get the results back to me before the puppies leave home.
The latest news is that the other gene involved in CT has been identified so hopefully an exact test will become available in the not too distant future.
Prior to mating I also test the prospective parents for congenital and non-congenital eye diseases, fortunately none have been affected.
Temperament: the Bedlington only looks delicate, I like to think of them as a lap dog with attitude. Adoringly affectionate with their owners, they are initially aloof to newcomers to see if they warrant attention. If a Bedlington likes you he is not shy in demonstrating it. They are loyal to their owners who they consider to be the centre of their universe. They can be stubborn so I recommend obedience training, puppy pre-school is good as long as the other dogs are about the same size. Bedlington pups are not as “full-on” as some other breeds and can be overwhelmed by boisterous pups. Bedlingtons are not as well known as other breeds and not all trainers understand the sensitivity of the breed.
Conformation: is also important to ensure that the puppy you get from me can take all the activity in his day. Several of my puppy owners have told me their dogs catch rabbits on the run. The Bedlington has a springy gait when walking slowly, but a Bedlington running is poetry in motion.
I am a member of the National Bedlington Terrier Association (UK),The Bedlington Terrier Club (UK),The Bedlington Terrier Club of America. As a breeder of Bedlington Terriers I am aware of my responsibility to learn as much as possible, and to keep abreast of developments within the breed.
Where to find us
We moved to the Canning Vale Kennel Zone so our dogs would have more room to play. We have 1.5 acres that we have almost finished landscaping with lots of help from the “kids”. They love it here so it has been worth the move for them, and when we finally finish the gardens it will be worth it for us.