Intro
Once a staple on American farms, this small dog is now rarely seen.

Appearance
This is a small but muscular dog. They have strong shoulders and legs and deep chests. Their coats are sleek and short. Traditional colouring is black tricolour (commonly called black tanpoint with piebald spotting), but other colours like red, burnt orange, chocolate, lemon, sable, and brindle – all on a base of white – are available. Blue and brown tricolours are common, too. Ticking is visible on the skin underneath the white fur.

Their ears are always carried upright, but can be button or tipped as well. This gives them a constantly alert appearance. Their tails vary in length.

Rat Terriers are available in toy, mid-sized, standard, and giant sizes. Miniatures or toys are 32.5 cm and less at the withers and weigh 4.5 kg or less. Giant sizes weigh more than 11kg.

History
The exact origin of this breed is unknown, but they likely come from crosses of Whippet, English White Terrier, Smooth Fox Terrier, and Manchester Terrier. In the early 20th century, their value as ratters grew and more farmers and homesteaders obtained these dogs for their own. They were bred further, with Italian Greyhounds, Beagles, and Miniature Pinschers. Their purpose was to hunt vermin and small game like hare and squirrels. Speed and agility were important traits in this breed. Many American farms had at least one of these dogs as pets and working animals, used as hunting companions and killers of vermin.

They were named by gambling English immigrants who put these dogs to work in rat pits.

They were exported to Europe and other areas of the world and became one of the most popular breeds known for their protective instinct, herding abilities, and ratting capabilities. Chemical pesticides and factory farms caused a decline in their popularity until present day. These dogs are now considered rare.

Famous owners of Rat Terriers include William Faulkner, John Sandford, and Shirley MacLaine. One of these dogs is mentioned in the book To Kill a Mockingbird by Harper Lee.

Temperament
These spunky, high-energy little dogs love to play. They are very protective of their home, their people, and pets they understand are not meant to be harassed. In fact, Rat Terriers are possibly the smallest herd dog in the world. It does take some time to train and socialize them, but a well brought-up dog of this breed is calmer and less aggressive than a Jack Russell Terrier. It is essential, however, that all of these dogs get socialized early and often to expose then to different situations, children, and other dogs.

They do well with older children and other pets in the household, as long as they are raised with them. They are not safe to have around smaller pets like gerbils and pet rabbits because of their hunting instincts. For this same reason, they should never be allowed off-leash unless in a fenced-in or otherwise secure area, because they will bolt in pursuit of any small animals.

Like other terriers, they do best when they have lots of mental and physical stimulation. A bored Rat Terrier can be destructive, aggressive, yappy, and generally ill-behaved. They also are great escape artists and can dig under a fence in a matter of minutes.

Unaltered dogs and bitches have the tendency to mark their territory, including the inside of a house – so have your pet neutered or spayed if you don’t wish to breed it.

Care and Grooming
These are fairly low-maintenance dogs when it comes to grooming. They need to be brushed only once a week to keep them tidy looking. They do constantly shed single hairs, like Jack Russell Terriers, so people who need a spotless home should not acquire a Rat Terrier as a pet.

If the dog doesn’t wear its nails down naturally, you should trim them once a month, or take the dog to a groomer who will do it for you. You should also check its ears for irritation, infection, and wax build-up. Good dental hygiene also benefits your pet, so brush its teeth once a week.

The Rat Terrier is a high-energy dog like all other dogs of this type. While they do need lots of outdoor exercise, they also need indoor activities to keep them occupied if kept inside for long stretches. These dogs need at least an hour of exercise each day to keep them happy and healthy. They enjoy obedience and agility trials, flyball, conformation shows, and den trials. They are excellent swimmers and love the water.

Health
These dogs live a long life of up to 18 years. There are a few health conditions to which they are prone, such as patellar luxation, elbow and hip dysplasia, incorrect bite, mange sensitivity, chemical sensitivity, and allergies. Merle variations tend to have typical health problems like congenital deafness and/or blindness.

Suitability As A Pet
These dogs are very trainable and easier to handle compared to other terrier breeds. Novice owners should have no troubles with them with some dedication and a little patience. They are very sensitive to their owners’ moods and the moods of people in the house. They need a lot of socialization so an owner who doesn’t with to expose his dog to different situations should not get a Rat Terrier. These dogs do well in the city in small apartments as long as they get plenty of exercise. They also love living on farms with lots of vermin to hunt and kill.

Toddlers should be taught not to harass or poke at these dogs. When irritated they might snap at little fingers or faces, and so do best in homes with older children. 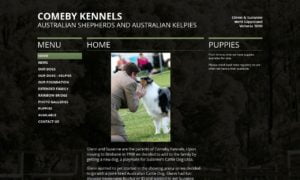