Overview:
The Dandie Dinmont Terriers are small dogs originally bred for hunting small game in the hill country of Scotland, mostly on the border with England.  They are part of the terrier family and have a low but loud bark that is easily distinguished from the rest of its terrier kindred.  They are confident dogs and very aggressive – especially over turf protection.  A bit challenging to train, the Dandie Dinmont Terrier considers itself much bigger than it is and owners must prove they are in charge from the very beginning of bringing a terrier home.  Because they are so very protective of their boundaries and the spaces they claim ownership to, they are not good dogs with children who might accidentally or on purpose cross their boundaries, as they can be quite vicious in defending their space.  Children in the home must be older and considered well behaved before you can even think about introducing a Dandie to the home.  They are definitely not suited for households with curious and explorative babies and toddlers.

Appearance:
The Dandie Dinmonts are small dogs that usually have pepper (silvery, blue-gray) or mustard (deep yellowish or cream tints) coats with both color schemes carrying points throughout of tan or silver for the pepper colored, and white for the mustard colored.  Their coat is a double-layered one which enabled it to tolerate the harsher weather elements found in the Scottish Highlands.  The hair is naturally short and rather curly with an abundance of it formed into a topknot on the top of the head.  While Dandies do not shed, they need regular brushing to keep their coat well maintained and to remove dead hairs, etc.  Their coat needs stripping several times a year which involves tedious removal of dead hair by hand.  Services of a professional groomer help make this breed easier to care for.  They have long, upside-down triangle-shaped ears and a very long, low-hanging body with rather crooked, short legs.  Tails are fairly long and commonly reach the ground.  Dandies’ little bodies are small but strong and flexible and they also sport very strong jaws and necks that help it survive while hunting rather vicious small game like badgers.

Temperament:
Carrying a common small dog trait, Dandie Dinmonts believe they are as big and capable as large dogs and aren’t afraid to take on anything.  Very confident and bold, they also tend to be aggressive when defending their territory or are threatened and have been known to bite.  With that confidence also comes a dignified and reserved nature.  They have low exercise needs and are well suited to over-crowded living situations such as small apartments in the city as long as their personal space is respected.  They will also tolerate children okay as long as they do the same.

History:
The Dandie Dinmont Terrier breed was first documented as being bred for working stock on the highlands of Scotland in the early 18th century.  In hunting, their primary job was to trail and chase otters and badgers to their lairs underground.  Their fearless nature and natural body characteristics allowed Dandie’s to survive tussles once they reached the prey they were trailing.  It is thought the Sir Walter Scott might have either become familiar with Dandies through his travels, or owned one.  He is believed to have coined the term “Dandie Dinmonts” in one of his novels using it as a name for one of the characters in his book who was better known for his terriers thus Dandie Dinmont soon became the name of the breed once Scott’s novel was published as readers then began describing their own terriers as Dandie Dinmonts.

Care and Grooming:
As previously stated, professional grooming services are very helpful if you own a Dandie Dinmont, especially since its coat of hair not only needs regular brushing, but also regular plucking of out of place hair with complete stripping of the coat a couple of times a year.  They also need regular trimming of the hair around their eyes, ears, face, and feet.

Health:
Dandie’s are a moderately healthy breed but have genetic tendencies towards developing spinal and eye disorders and diseases, and epilepsy.  They frequently exhibit traits of hypochondroplasia which creates the bowlegs that are shorter than even the legs of average small dogs.  Their ears need frequent checking, as they tend to build up wax quickly within the ear canal creating ear infections easily.  As their teeth tend to deteriorate with age, it is a good practice to brush Dandie Dinmonts teeth at least once a week beginning as early in life as possible in order to help delay the onset of bad teeth.

Dandie Dinmonts do not tolerate extreme exercise well as their endurance levels are low, but they do enjoy walks and other short-lived types of exercise because they are active with high energy levels.

Suitability as a Pet:
The Dandie Dinmont breed is not a good choice for first-time dog owners as they have quite a few characteristics that need to be trained properly from the beginning.  With their more aggressive nature, they are clearly unsuitable in households with young and curious children who need safety to explore their domain but are at risk for vicious bites from the Dandie if they cross into his territory.  They also do not mix well with other household pets so any other small creatures like cats or rabbits are not particularly safe in a home with a Dandie.

However, they are well suited for households that are not intensely active, and who prefer their Dandie be an “only-child” type of pet.  They are not a good choice for families or individuals who expect the terrier’s company on long hikes, runs, etc.  They also do great living in smaller environments such as apartments in the city where it may be difficult to find areas for extensive exercise.  Dandies are happy with short walks, and with such an independent spirit, they are not prone to separation anxiety or similar neurotic tendencies so can be left home alone.

Training:
Training a Dandie Dinmont terrier is a challenge – especially if you are an inexperienced pet owner.  They believe themselves to “be the boss” of everyone until you prove otherwise.  If a Dandie does not believe you are capable of being the boss, he will simply refuse to listen.

Consistency is an absolutely necessity in the training of this breed along with clear, firm boundaries as they will take any “permission” (or ignoring the problem) and run with it as long as allowed to do so.

The best tricks of the trade in training Dandies is primarily training using positive rewards such a favorite treats in abundance.  If you try to train a Dandie through harsh, punitive measures, he will also solve that issue for himself by just refusing to listen or cooperate. 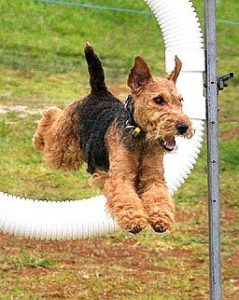 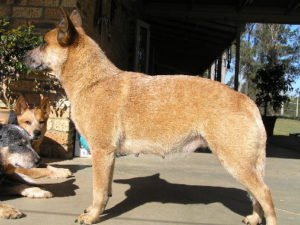 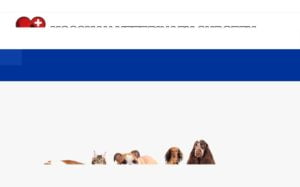