Intro
The Caucasian Owtcharka is an ancient dog breed that originates from in the Caucasus mountains, and is common in the Western Asia/Eastern Europe area.

Appearance
These are extra-large, muscular dogs with no maximum height. The average height is between 67 and 75 cm at the withers. They have a large head, dark, deep-set eyes, bushy high-set ears, and black noses. These dogs, when viewed from the side, are slightly taller at the rear hips than at the withers. They have large, heavy paws covered in dense fur to protect their feet from cold and rough terrain. They are very heavy-boned overall. Males are larger and heavier than females, with heavier heads and a more abundant mane.

They are covered in dense, thick, weather-proof fur. They have both an undercoat and a top coat to protect them from extreme weather conditions. Their long, thick tail is covered in a profusion of fur and carried in a hook shape.

They come in both short and long-haired types, but long-haired is desirable. Long-haired dogs have a mane, combings, and pants. Short-haired dogs do not have these longer featherings. They may be grey, white, or tiger-coloured. Solid dogs may have black masks or shields, or white marks on the tail-tip, stomach, paws, or breast.

History
This is an ancient breed first developed by herders in the Caucasus mountains. They likely were derived from Tibetan Mastiffs, although the exact origins of the breed are unknown. They were used to guard livestock, protect properties, and hunt and kill bears and wolves. Now they are still used as property and livestock guardians in the Eastern European/Western Asia countries and are used mostly as watchdogs and companions elsewhere.

In the 1930s, the dog came close to extinction. Although it came known to people outside of the Caucasus region, particularly in Germany, the breed was almost wiped out. Finally, the breed was restored through the hard work of four professors. It is still a relatively uncommon breed outside of its homeland and a few other countries such as Armenia, Azerbaijan, and Georgia.

Temperament
These dogs are courageous, alert, strong, assertive, and strong-willed. They have a tendency to ferociousness and dog aggression, so early and frequent socialization is absolutely necessary if you want your dog to be safe around other dogs. They have a deep, instinctual urge to protect their people – children and adults, other pets, and livestock, and are indifferent around strangers. It can become overly ferocious when guarding what it considers “its” duty, which means neighbourhood kids who may be a little rough with the dog’s family members. Injuries can occur when these dogs are left alone with children.

These dogs need strong, consistent owners with strong leadership tendencies. Training needs to begin early and be continued throughout the dog’s life.

Care and Grooming
The short-haired variety need to be brushed or combed once per week. The long-hair variety requires more frequent grooming – once every few days. Pay particular attention to the areas of feathering and make sure to target areas prone to matting.

The dog also needs its ears cleaned and inspected once a week, and its teeth brushed once a week unless it gets raw bones on which to chew on a regular basis. Inspect its toenails regularly and clip as needed. Some dogs wear them down naturally outside on hard surfaces.

This is a surprisingly low-energy breed when they’re not working. One good-length walk per day is sufficient. They do best in country homes with lots of outdoor space in which to run. If possible, utilize their instincts and have them work as livestock guardians.

Health
The Caucasian Ocharka, like other ancient breeds, has very few health problems associated with it. Some conditions to which it may be prone include hip dysplasia, heart conditions, and obesity. Choose a dog from a reputable breeder to ensure you get a healthy dog.

Suitability As A Pet
These are not dogs suitable for novice dog owners, or ones who have little time or patience to properly train or socialize a dog. They need a lot of dedication to ensure they are properly socialized.

They do best living in the country, with families or single people. When possible, they should be used as livestock guardians. They can live outside as long as they have proper protection from the elements. 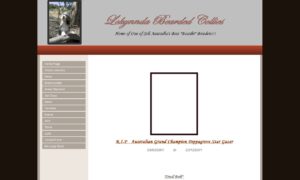